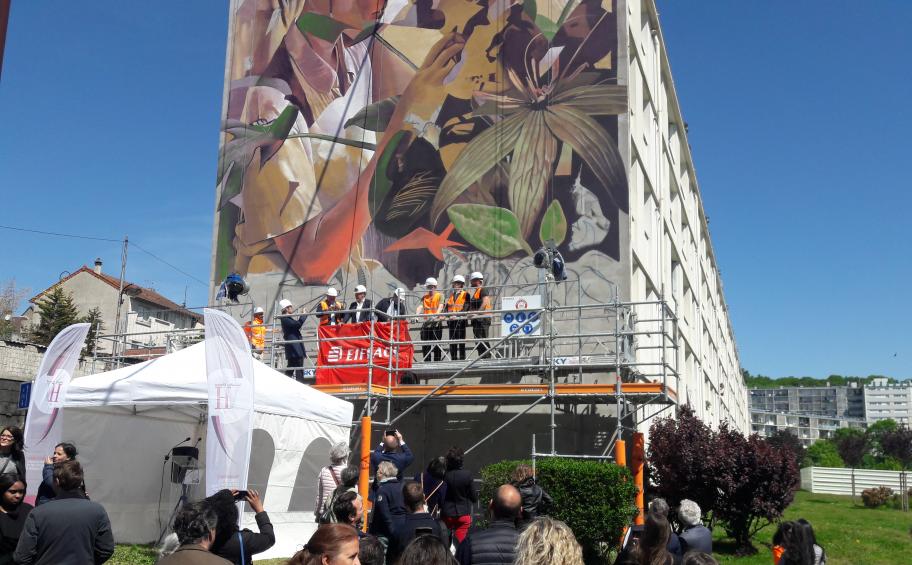 The extensive renovation plan of 1096 social housing units initiated by the city of Versailles through its municipal office of HLM Versailles Habitat in the district of Bernard de Jussieu was officially launched on May 14. Led by Eiffage Construction, this extraordinary restoration project incorporates the realization by muralist artists of nine monumental frescoes.

In front of the fresco of the duet of Dutch artists Telmo Miel, the ceremony of first stone of this vast project of renovation officially began. This project of renovation is led by Eiffage Construction and the architectural design is taken care by the cabinet ITHACA. Of a total surface of 57 000 m ², the program of the works includes a total rehabilitation of 22 buildings on the energy plan, the new esthetics by using in particular facings of bricks and a requalification of the entrances of buildings with the creation of extensions.

As an inaugural gesture, a first brush stroke was given by François de Mazières, Mayor of Versailles and President of Versailles Grand Parc.
In fact, this operation honours urban art with the establishment of an artistic program of nine monumental frescoes, piloted by Quai 36, collective revaluating art in public spaces, within the framework of the cultural policy of the city of Versailles. By 2021, nine renowned muralist artists (Aryz, Eron, Jade Rivera, Mona Caron, Pastel, Sainer, Seth, Telmo Miel and Waone) will follow one another to create vegetable and animal frescoes that will pay tribute to the famous French botanist Bernard de Jussieu and his work on plant and animal species in this eponymous district.

Eiffage Construction’s involvement in this project is in line with its mission as a Citizen Enterprise. Strong commitment to CSR, Eiffage Construction has the ambition to create key projects for societal evolution such as that of Bernard de Jussieu, which introduces art to the everyday life of its inhabitants and transforms their place of life into a realyou of contemporary artistic creation, directly involved in the development of the cultural heritage of the city.

Present personalities in the event: