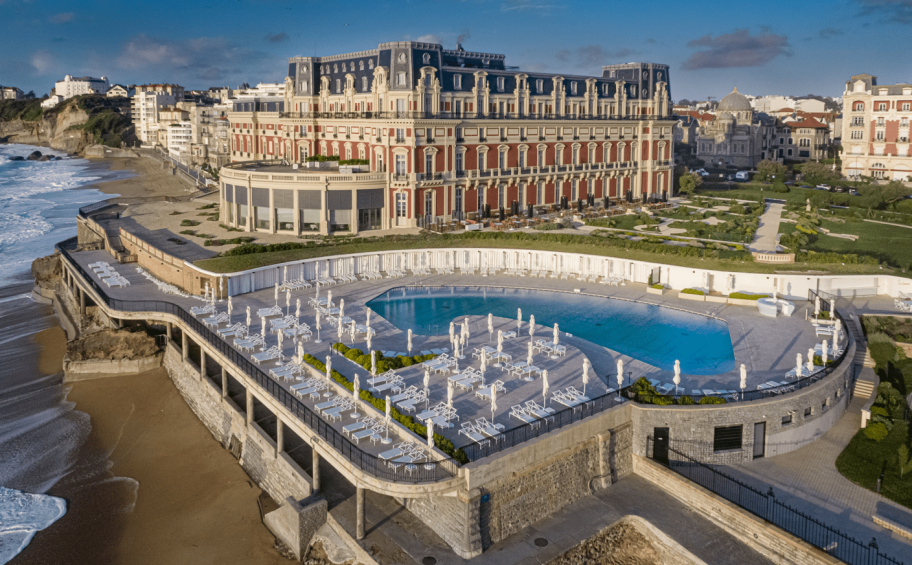 The legendary 5-star hotel, with a surface area of 12,000 m2, has undergone a major renovation, as evidenced by the sequencing of the work in three phases, spread over four years. Socomix, whose main shareholders are Biarritz City Council and JCDecaux Holding, awarded the renovation of the Palais de Biarritz hotel to Eiffage Construction. In total, around one hundred rooms, the reception areas and the entire basement housing the hotel's services were refurbished. Pradeau Morin, an Eiffage Construction subsidiary specialising in renovation and historical monuments, carried out the refurbishment of all the exterior facades.

The Villa Eugénie was built in 1854. At one time a secondary residence of the Empress Eugenie, for whom Napoleon III had it built, this monument was transformed into a hotel-casino in 1882 and took on its current name some ten years later. Destroyed by fire in 1903, it was rebuilt almost identically, except for its overall structure, which was shaped like an E (in homage to the Empress Eugénie). During the 20th century, the address became a haven for stars and contributed greatly to the city's influence. In 2011, it even received the distinction of "Palace of France".

The majestic building on the Basque coast has undergone titanic renovation work, divided into 3 phases:

First phase: renovation of the first half of the rooms between October 2018 and June 2019.

Second phase: renovation of around one hundred rooms, reception areas and the entire basement from October 2019. The roofs, joinery in the west wing and facades have also been renovated.

Congratulations to our teams in the South-West region and to Pradeau Morin for this magnificent achievement.