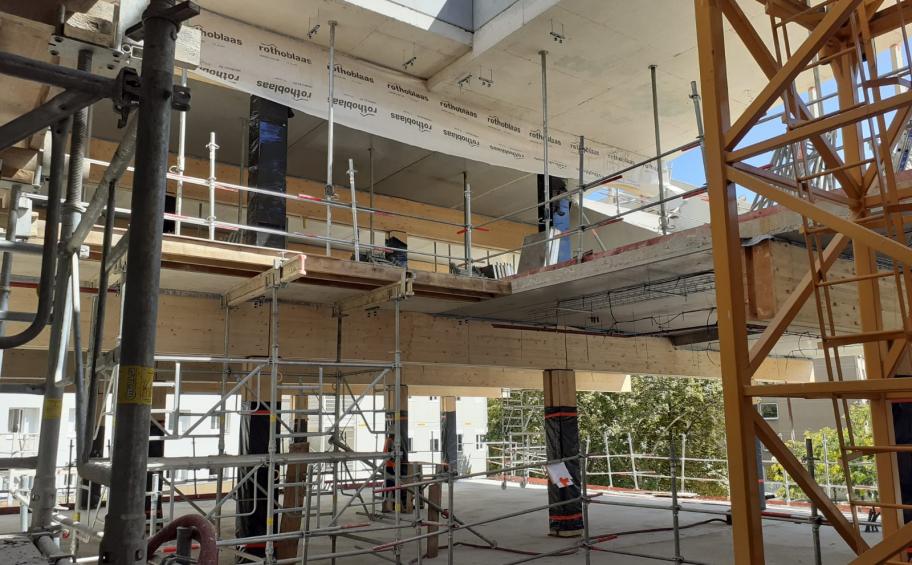 A year ago, work began on the reconstruction of the former headquarters. Today, the superstructure works have just been completed by Eiffage Construction Bois. An important step for this project resolutely turned towards a mixed wood/concrete construction and with real landscaped terraces.

Located in the 20th arrondissement of Paris, the new RATP Habitat headquarters will be delivered in the 1st quarter of 2021. This construction takes place after demolition of the old building: if the superstructure is built in new, the infrastructure has, on its side, been preserved. The work therefore included the reinforcement of the infrastructure on one level, to ensure the foundations of the new building.

The premises, intended for the head office RATP Habitat, a social real estate subsidiary of the RATP, and built with the delegated contractor RATP Real Estate and the Oteis design office, were designed by the architectural agency Atelier du Pont. They total nearly 3000m² of R+2 surfaces. Indoors, they are made of a mixed wood/concrete structure: the beam poles are made of wood, the walls and slabs are made of prefabricated concrete. Evolutive, modular, bright, they combine individual spaces and common workspaces. From the outside, the building sculpted in steps brings a real green setting to the site. It adapts to the surrounding landscape thanks to a set of south-facing terraces that allow to live on the roofs.

The latter are also representative of the building’s environmental approach, which consists of a reintegration of nature into the city: the roof is vegetated, and photovoltaic panels will be installed. They will cover part of the building’s energy needs. In terms of energy and environmental performance, the operation is labeled HQE Excellent, BREEAM Very Good, and E2C1.