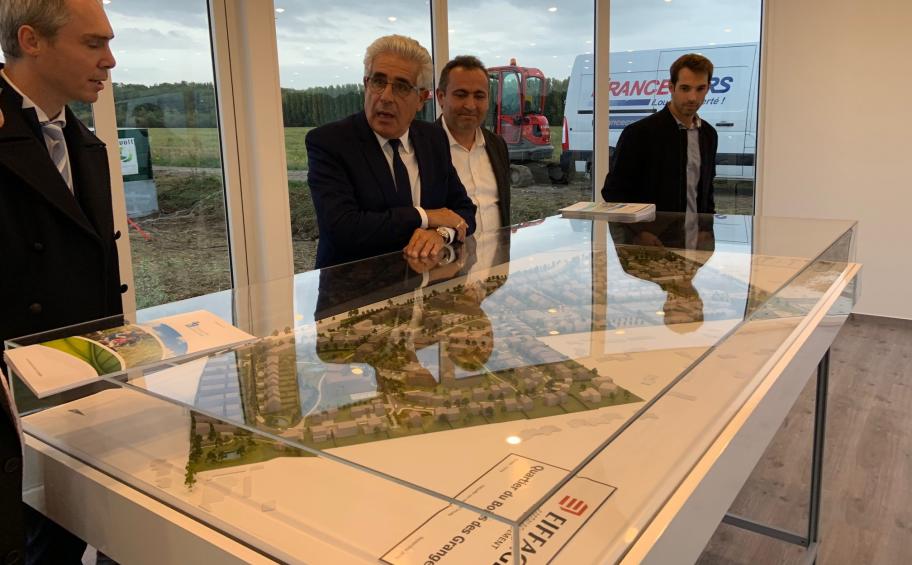 On 26 September, Eiffage Aménagement, in partnership with the developers Eiffage Immobilier and Ceprom, organized the launch party of the second tranche of the ZAC of the Bois des Granges de Claye-Souilly.
This evening brought together Yves Albarello, the Mayor of Claye-Souilly, his Urban Planning Assistant, Laurent Jacquin, his Director General of Services: Mr. Guillaume Cabaribère and many Clayois, interested in this new district. The new complete mock-up of the operation was unveiled on this occasion in the sales village of the ZAC.
Three more units will be completed by Eiffage Aménagement afterwards, for a projected completion of the district in 2023.

Located south of the town of Claye-Souilly, the district of the ZAC du Bois des Granges will stretch over 25 hectares of land where will be created an urban extension with mainly residential vocation.
The objective of the City of Claye-Souilly is to combine the preservation of the living environment with the construction of housing and equipment, favouring a controlled urbanization. As a result, at the end of September 2018, Eiffage Aménagement was designated as the Bois des Granges BIA developer to build more than 500 new dwellings: collective dwellings, intermediate and building lots on a 43,500 m² floor area. These accommodations will be arranged around a welcoming central square.
Eiffage Immobilier will be in charge of the promotion of collective dwellings.
The CAZ will also include shops, a school and a health home.

The project will be designed by urban architects Jean-Marie Lattard and Damien Tavares of DT Architecture and landscape architect Denis Targowla.
50% of the right of way of the future Bois des Granges district will be treated in green spaces, allowing the realization of many valleys.
The three districts of the ZAC each offer distinctive architectural features, ranging from the most modern architecture to the Briard and traditional style.
This diversity in architecture will allow each district of the CAZ to have a marked identity.

At the launch of the 2nd tranche of works on 26 September, the Mayor and his municipal team, as well as the technical services, first recalled the ambitions of this development operation, both in terms of architectural quality and environmental performance.
The first marketing information was unveiled by the promoters present, in order to allow the participants to learn about the project and the terms of acquisition of the collective apartments put on sale: 2 to 4 rooms and lots to build.
Marketing began on 28 September for the other potential buyers.