Eiffage, AIA, Scaprim and Credit Agricole recognized at the 2018 SIMI Grand Prix for the Grand Hôtel-Dieu of Lyon 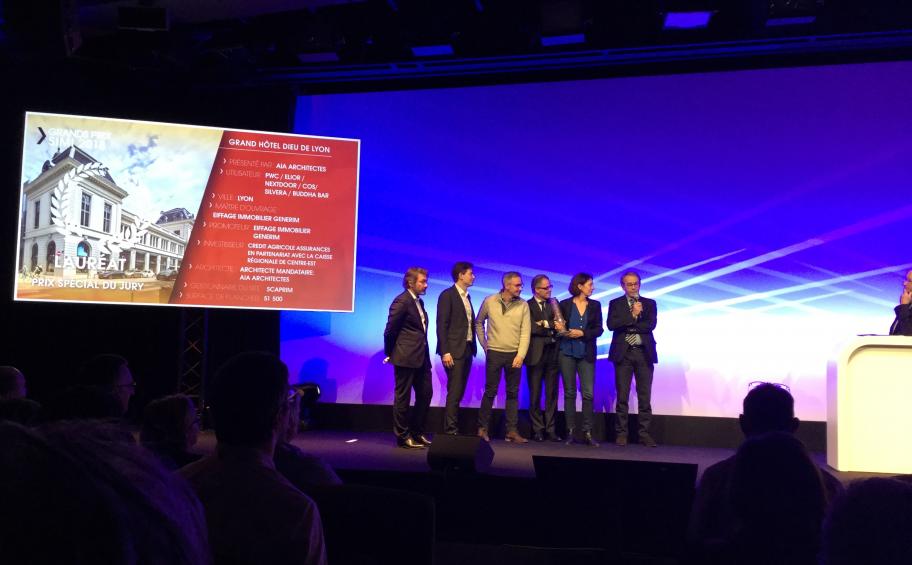 For the 17th edition of the SIMI, tradeshow of Real estate compagnies 2018, Eiffage, AIA Architects, Scaprim and Crédit Agricole received, on Friday, December 7th, the Special Prize of the Jury for the reconversion of the Grand Hôtel-Dieu of Lyon, biggest reconversion of an ancient memorial in France.

The Grand Hôtel-Dieu of Lyon is one of the most symbolic projects of the Lyon urban district and France, concerning the reconversion of a prestigious Ancient memorial and the creation of a new district to be lived at the heart of the city center, in a zone registered on the World heritage of the Humanity by the UNESCO, since 1998.

In 2010, Eiffage Construction was appointed prize-winner of the consultation launched by the civil Homes of Lyon, with the architects Albert Constantin and Claire Bertrand - AIA Life Designers, Didier Repellin, Chief architect of Historic monuments, and Intercontinental Hotel Group. They delegated the realization, for their account, to Eiffage Immobilier associated with Générim.

In 2015, Crédit Agricole Assurances, and the Caisse Régionale of Crédit Agricole Centre-Est, acquire with Eiffage Construction the entire constructions with the exception of the International Cité of the Gastronomy, which will be handed at its delivery to the Metropolis of Lyon. Both investors attributed the management of the site to Scaprim.

The ambition of this project is to reinterpret the history while asserting the identity of the place to immortalize the sense. The project joins in an architectural continuity seizing at the same time the complexity of the site. It reveals a rich building, a fruit of a remarkable architectural synthesis, a place in perpetual transformation as proves it all its history.
His second breath, the Grand Hôtel-Dieu of Lyon, will find it again as the crossroads of social and professional life that it has been over the centuries. An open and dynamic space that offers a multitude of services and activities to Lyonnais and occasional visitors.

The environmental reflection on the project fed on commitments of the City of Lyon expressed through its Agenda 21 and through the Plan Climate. The reconversion of the Grand Hôtel-Dieu of Lyon obtained the environmental certification BREEAM, the level " Very Good ", energy consumptions are in particular 30 % lower than the reference consumptions.
Useful links
Group websites
Follow us