Challenge completed: installing three cranes in the heart of the Grand Hôtel-Dieu of Lyon 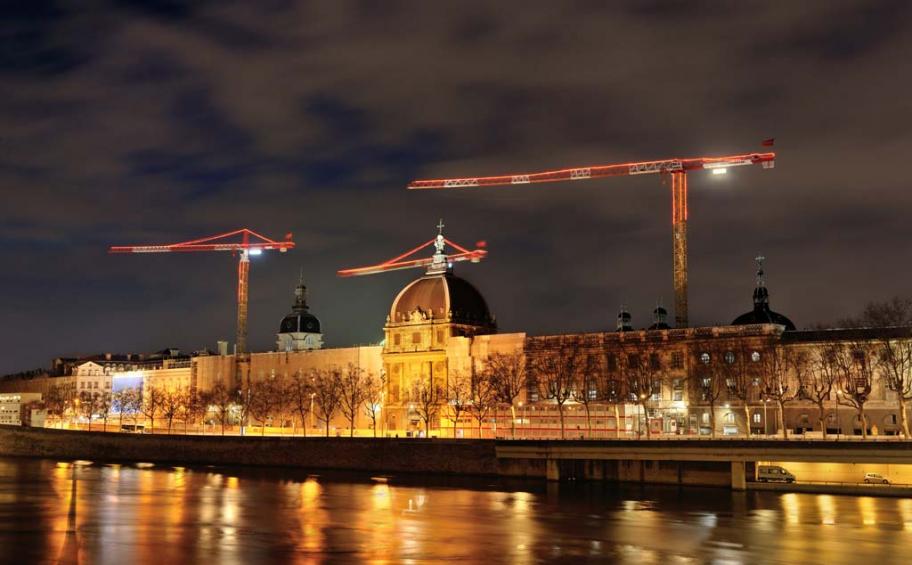 Visible from a distance, the three huge cranes of the building site will have been the symbolic signs of the renaissance in progress of the Grand Hotel-Dieu, a project carried out by Eiffage Construction Centre-Est. These cranes have an essential role in the construction site, since they are largely responsible for the supply of materials. In this extensive but constrained site, in hyper-city center, this point is complex because storage capacity is limited.

Logistics for the supply of this site requires a software, which centralizes the delivery needs of all the companies working on site: they specify the desired delivery area, the volume of materials ... The security PC then manages access to 6 delivery zones all around the Grand Hôtel-Dieu: 3 on the Quai Jules Courmont, 2 rue Bellecordière and 1 place de l'Hôpital.

Called the G1 (southernmost), G2 (center of the site) and G3 (most northerly), the three cranes, piloted by camera, each have their specificities, in their design or their role. While G2 and G3 behave more conventionally, G1 requires much more experience and skill. G2 was used extensively for the construction of new buildings as well as G1 which, in a second phase, focused on the canopy. G3 built the convention center and managed the supply of the four-row area, difficult to access.

The cranes also allowed the evacuation of materials, during the earthworks of the courts for example. G3 was chosen with a particularly long boom (75 m) to get materials up to the hospital square!

The three cranes are permanently connected by GSM with the Eiffage hardware department, which records all their activities, detects errors and handles troubleshooting.

The installation of the cranes in the heart of the site also makes their assembly and disassembly very complex.

For G1 for example, the most imposing of the three, a mobile crane of 350 tons, with 100 tons of counterweight and bracing is required. Its assembly and disassembly take two days, to which must be added the 4 days of assembly and dismantling of the "tower crane" itself. 12 semi-trailers ensured its supply and its return on the park of Eiffage equipment!

The dismantling of G1 is particularly complex, as it is necessary to extract the crane and the enormous counterweights through the canopy of the cour du Midi. Fine steering!

In total, the cranes have operated 8,500 hours so far!