Duchêne, subsidiary of Eiffage Benelux, built a lock with big size on the site of Ampsin-Neuville between Liège and Namur 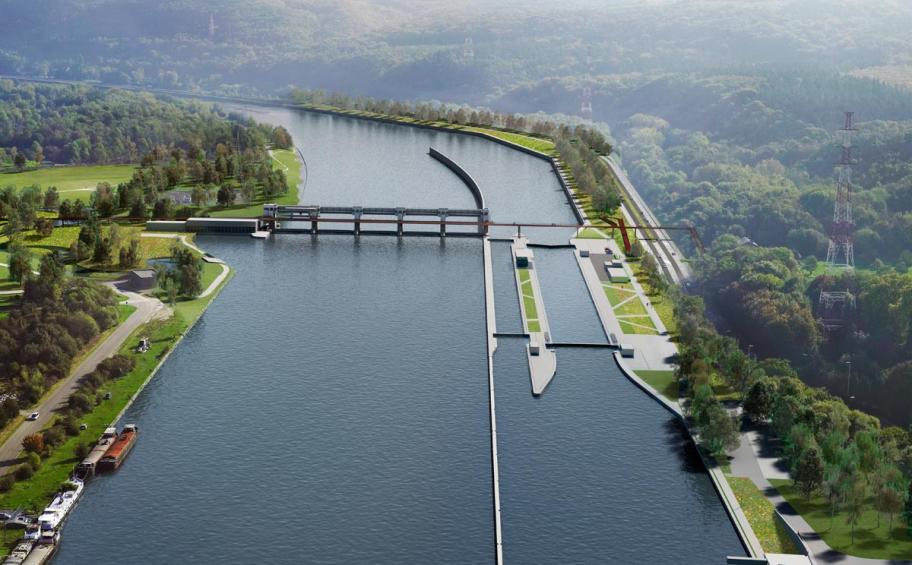 Under the direction of the client Sofico and the executive management of the hydraulic ways of the Public service of the Wallonia, this market of civil engineering was given to the subsidiary Duchêne.
The project plans the construction of 2 new locks bigger than the current.
The works are going to begin in 2018 with the objective to end in 2023.

Located on the Meuse, the site lock keeper of Ampsin-Neuville is the 3rd busiest of Wallonia. 9 250 000 tons of goods passed in transit in 2017, a figure which doubled in 20 years. Working since 1958, the site is rehabilitated today to reduce the waiting time of the boatmen and allow the passage of boats of bigger sizes.

The current site of Ampsin-Neuville allows the simultaneous access of the boats of 2000 and 600 tons thanks to two nearby locks: a big one of 136 x 16 m and a girl of 55 x 7,50 m. The rehabilitation consists in replacing the small lock by a lock of 12,50 m at first to assure the navigation during the construction of the big sieve of 25 m. The site will be maintained in exploitation during all the duration of the works for an optimal fluidity.

These works are going to allow the lock of Ampsin-Neuville to register the region at the heart of Europe by being capable of supporting the increase of the transport by inland waterway. The prospect on the horizon on 2050 with this new lock is being able to channel through more than 25 million tons and to increase the capacity of the whole network.

These works will also allow to improve the living environment of the users, the cyclists, and the walkers: