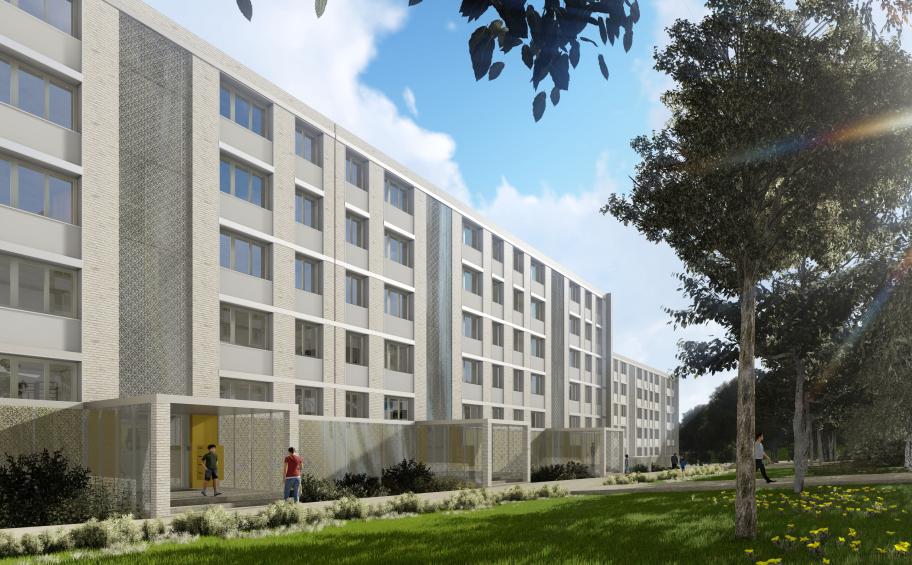 The city of Versailles, via his municipal service of HLM Versailles Habitat, threw a vast plan of renovation of 1096 social housing in the district Bernard de Jussieu. An artistic program of nine monumental frescoes, piloted by Quay 36, will be integrated into the project of restoration within the framework of the cultural policy of the city of Versailles.

An ambitious program of rehabilitation

Versailles Habitat chose the grouping led by Eiffage Construction to renovate 1096 social housing, of the district Bernard de Jussieu. The architectural conception is taken care by the cabinet ITHAC

The rehabilitation of this housing set from the sixties is going to allow to answer the current aspiration of the inhabitants both on the built (rehabilitation of facades, heat insulation) and the outside environment (better distinction between public and private places, car park, lighting).

At the end of the four phases of work of renovation, in 2021, this district will  benefit from housing in the thermal performances improved within a qualitative environment.

An artistic program around the nature

Versailles Habitat wished to revalue the urban design and to support emergent or confirmed artists by integrating nine monumental frescoes into the district.
Real acts of commitment, these realizations will put in the honor the district and its inhabitants by introducing the art at the heart of their everyday life and by transforming their place of life into real meeting of contemporary artistic creation, participating directly in the development of the cultural heritage of the city, in echo with one of the main trunk roads of the urban project: "Versailles, city-nature".

Frescoes also join a territory marked by the truck, horticultural and landscaped farming. Thus nine renowned artist-muralistes will be inspired by themes of the nature, by the bestiality and by the history of the site to pay tribute to the famous French botanist Bernard de Jussieu and to his work on the botanical and animal species in this eponym district :
Useful links
Group websites
Follow us