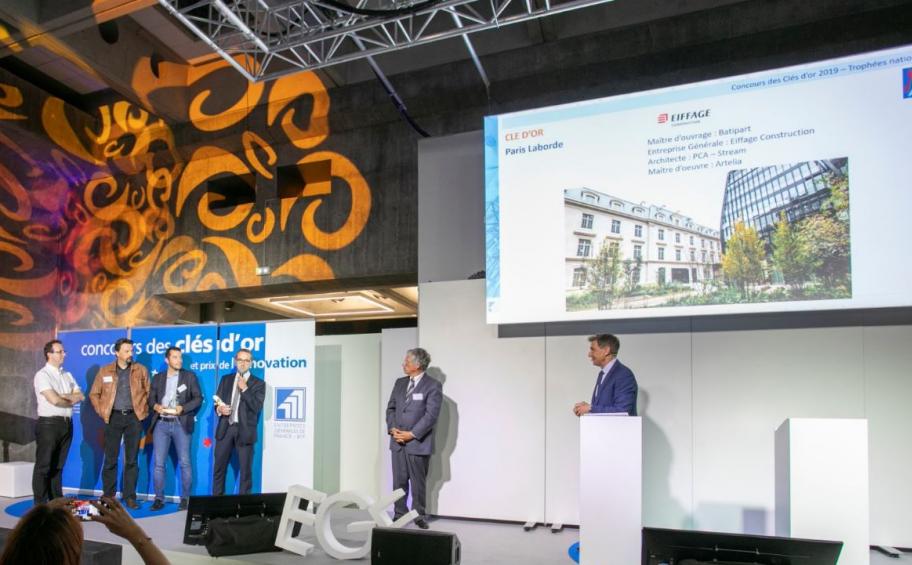 Received this Wednesday, June 5 at the Ninth Meeting of the Construction of EGF-BTP, this Golden Key rewards Eiffage Construction for the renovation and expansion of the old barracks of the Nursery located on Laborde Street in the 8th district, in an office building.

Led in general by Eiffage Construction, the rehabilitation of this former military barracks dating from 1763 had started in July 2016. The new 19,200 m2 Laborde unit was delivered in October 2018 after 25 months of work to the Crédit Mutuel Insurance Group. The owner was accompanied by ARC-SAS as assistant to the contracting authority and Artelia as project manager.

The restructuring, conceived by the architectural firm PCA-STREAM and the architect Philippe Chiambaretta, focused on the rehabilitation of two buildings and the construction of a modern fully glazed extension.
The two rehabilitated buildings saw, for one its restored façade and its clarified volumes, for the other its main volume enlarged, and its deconstructed side wings to make way for cascading terraces.
Finally, as a link between these buildings, the courtyard now houses a completely new office building, lined with long glass façades signed by Goyer, a subsidiary of the Eiffage Group specializing in the design and implementation of aluminium and glass facades.

The tertiary complex has been awarded the NF HQE Exceptional Level Tertiary Buildings certification for both the new part and the renovated part as well as the HPE Label. The renovated buildings also benefit from the BBC Effinergie Rénovation label.