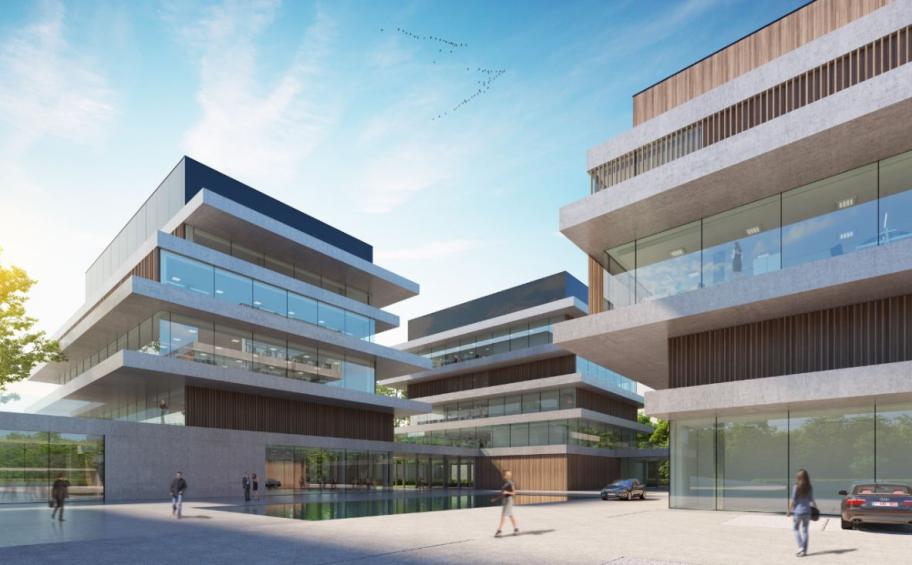 Antwerpse Bouwwerken and Vuylsteke have started the construction of the O-Forty offices complex in Oostkamp near Bruges for Global Estate Group, a Dutch real estate developer.

With 35,000 m² - parking included, O-Forty will be one of the largest and most innovative business sites in Flanders. This office complex aims to become the Flemish ‘Google Campus’ as it will house as many as 800 technology and IT employees

The first phase of construction includes the bulk work of the first two buildings on a series of eight six-storey towers. In addition to the offices, there will also be common meeting rooms, a kitchen, a bar, patios and a reception room for about 100 people.

The complex is constituted by buildings said "intelligent" which will favor the energy saving with the automatic stop of the heating and the lighting at the exit of meeting rooms and a system of ventilation which will blow of an air purer than usually in offices. Global Estate Group wants to end "Sickbuildingsyndroom", a fashionable Flemish word to describe all the troubles (headache, the fatigue, apathy, loss of concentration, eye and respiratory disorders(confusions).) - often caused by the air conditioning. According to the experts, the meetings could be much more effective by spreading healthier air through buildings.

With this new ventilation system, 43 m3 of fresh air will soon circulate in O-Forty buildings, compared to only 30 m³ in traditional government buildings.
O-Forty will also be a near-zero energy project, generating at least 10 kWh/year/m² of renewable energy through a heat pump and 200 solar panels.