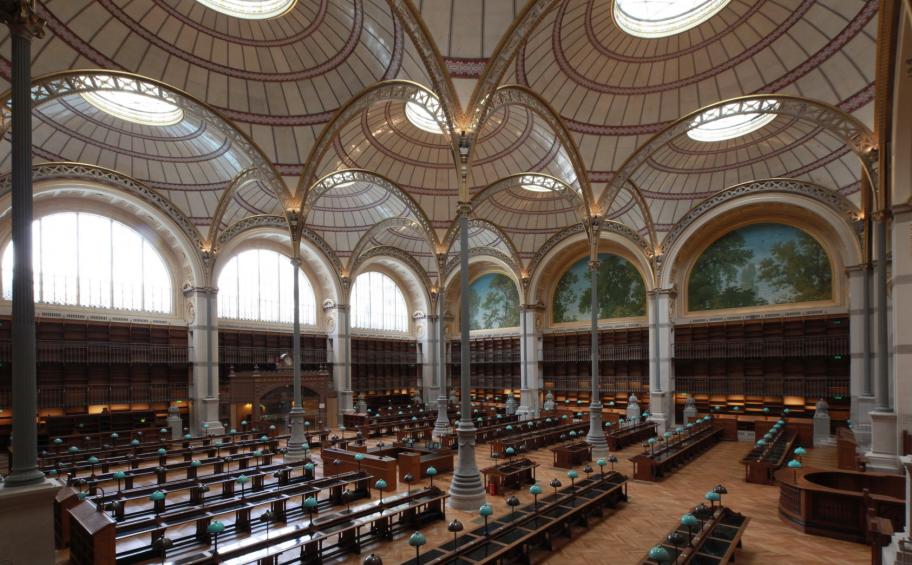 The refurbished Quadrilatère Richelieu – French National Library – was inaugurated in mid-January marking the end of an extraordinary technical and human adventure for the Eiffage Construction Equipements and Eiffage Énergie teams.

The event was headline news: on 11 January, the President of the Republic officially inaugurated the refurbished areas of the Quadrilatère Richelieu, the historic centre of France’s National Library dating from the 17th century.
This event was the culmination of a vast works project conducted by Eiffage Construction tasked with the heavy construction work (€24 m) that led to the complete refurbishment of two of the site’s emblematic sections: the Labrouste Reading Room that had remained unchanged since the 19th century, and the central stacks where the collection is housed.
“It took five years to complete this exceptional operation commissioned by the Ministry for Culture and Communication”, summed up Florent Bonnet, Operations Manager, Eiffage Construction Equipements. “It is the largest heavy refurbishment project conducted in Paris in over two decades.”
Structural reinforcement, creation of 7500 square metres of floors, six stair and lift wells, access for people with disabilities, restoration of the original decoration, etc., over 15 levels in a listed historic monument without using cranes or any direct external access: this complex project was successfully completed thanks to the total commitment of the 60 or so journeymen who worked in succession on the project.

For the technical lots, Eiffage Énergie Thermie Île-de-France was responsible for the heating, ventilation air conditioning (HVAC), smoke extraction and plumbing lots.
As the conservation of the library’s priceless collections requires optimum temperature and relative humidity conditions, the teams installed 76 air conditioning units, 23 air treatment units and 158 fan-coil units. For the plumbing lot, 51 sanitation blocks were installed to a rarely achieved level of finish commensurate with work on a listed heritage building, and our industrial heating specialists installed three 900 kW CPCU (Paris district heating network) steam exchangers.
The site’s safety was not overlooked either since extensive fire protection work also included: 171 fire hydrant hose units and 33 smoke extraction fans (of which four with a capacity of 48,000 m3/hr) now provide fire protection for the prestigious collections, employees and visitors.
Given the huge size of the project, the electrical installation by Eiffage Énergie Île-de-France was conducted in two phases:
In the first, started in June 2011, our teams installed the high and low voltage circuits, lighting and generator for the departments located along rue Richelieu, which include the main courtyard, Labrouste Reading Room and its storage stacks. They also installed a fire safety system and central building management for this part of the library complex.
For the second project phase, started in 2016, our employees completed the electricity work in the departments along rue Vivienne, which include the oval room and the Tubeuf courtyard. They were therefore working in heritage listed rooms when performing maintenance on the existing facilities. They also installed light fittings in a single piece as well as an aspirating smoke detector (ASD) system, two transformers (each 2000 kVA) and an emergency generator (550 kVA PRP).