Eiffage installs the first wooden components of the Hypérion tower in Bordeaux, a symbol of the Group’s low-carbon strategy 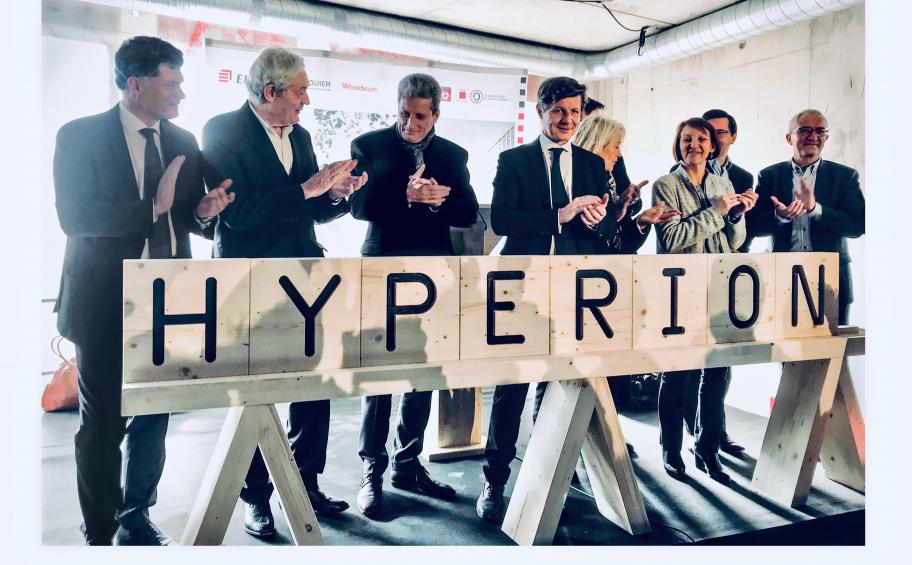 This unprecedented project has already garnered several industry awards and ties in perfectly with Eiffage’s low-carbon approach, which aims to reduce greenhouse gas emissions for all the Group’s developments. The tallest wooden tower ever built in France, Hypérion also stands out for its technical sophistication, with BIM-led design and two registered patents.

With the aim of becoming a key player in low-carbon design and construction, Eiffage has made ecological transition and innovation two major elements in its strategy. Investments in R&D have the dual objectives of reducing the Group’s greenhouse gas emissions right across every business line’s value chain and increasing the use of bio-sourced materials. One such material is wood, which is 100% natural and recyclable, and has already enabled the Group to complete around 30 projects in recent years.

Hypérion: showcase for urban regeneration in the new Euratlantique district

Designed and undertaken by the Viguier architectural practice, built by Eiffage Construction and backed by Eiffage Immobilier, Hypérion is a mixed housing complex that will contain 176 homes, 340 m2 of retail space and 3,900 m2 of office space, across five buildings. It will rise in the centre of Bordeaux, close to the Saint-Jean railway station, at the heart of the new Euratlantique district.
Since 2010, this district has been part of a vast urban regeneration programme led by the Bordeaux Euratlantique public development agency (EPA). By 2021, it will be not only a major business centre accommodating 15,000 workers, but also a cultural hub as home to the new Maison de l’Économie Créative et de la Culture en Aquitaine (MECA), and a cosmopolitan district boasting plenty of housing and amenities. The Euratlantique district is more generally a part of the “Bordeaux 2030” city modernisation plan, which aims to make Bordeaux a top-tier European city.
The Hypérion complex will play a major part in this regeneration. Through its innovative design symbolic of newly emerging low-carbon construction methods, this project will not only become the city’s showcase, but also represent the Eiffage group’s expertise in and commitment to sustainable construction that benefits the local economy.

One of the unique features of this project is its 55-metre, 16-storey wooden-framed tower with cantilevered balconies, named “Hypérion” after the largest tree in the world, a redwood growing in Northern California.
Hypérion consists of a concrete core containing lifts and staircases, complemented by a wooden structure: glued laminated timber beams, CLT (cross-laminated timber) flooring and Hypermob® wooden-framed walls developed under Atex as category A. The tower’s carbon footprint will be 370 kg CO2/m2 – 45% lower than its traditionally built equivalent. The solid wood used will store at least 1,400 tonnes of CO2 throughout the entire lifespan of the building.
In this respect, Hypérion is a natural fit with the new Low-carbon Building (BBCA) label it was recently awarded, which aims to halve the carbon footprint of new buildings. Recognised by the State as a “sustainable city industrial demonstrator”, the project benefited from a grant from ADEME’s Investments for the Future programme.

Eiffage Construction’s teams face a real technical and logistical challenge in building the Hypérion tower, which will involve 1,500 pieces of wood, all regionally sourced and manufactured. A “forest sourced label” established by Eiffage makes them traceable from forest to worksite.
The Hypérion complex has been recognised for its architectural and technical sophistication, largely made possible by its BIM-led design, and has been awarded the Nouvelle-Aquitaine Pyramides d’Argent Urban Mixity Prize 2019, the Grand Prix Régional and the Pyramides d’Or Grand Prix national 2019. It also won the BIM d’Or 2019.