Eiffage Immobilier and Européquipements lay the foundation stone for the E-conic project, a state-of-the-art office building in Clichy-la-Garenne (92) 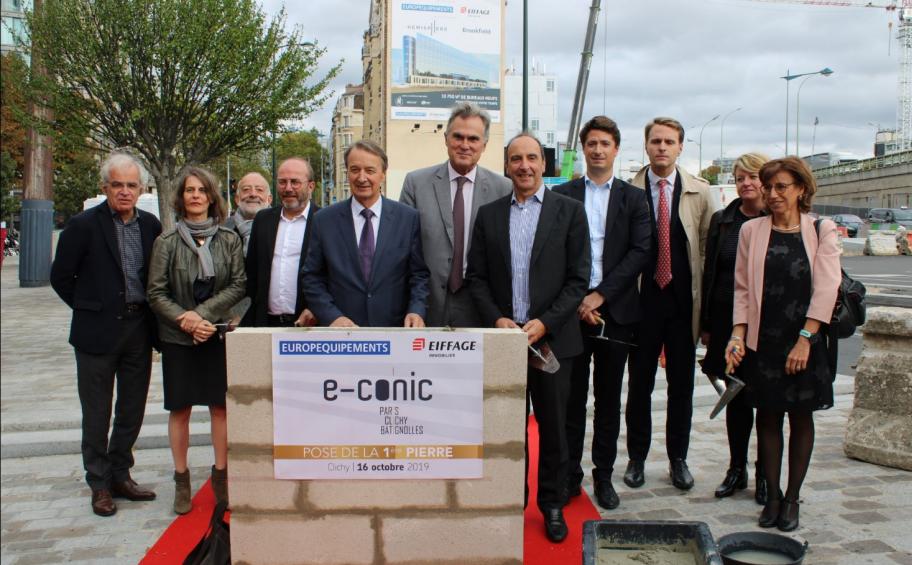 Eiffage Immobilier, in co-promotion with Euroéquipements, launched the beginning of the work of the E-conic office building on 16 October in the presence of many personalities. Located on the 1A block of the ZAC Entrée de Ville, the operation is part of the development project of the neighbourhood entrusted to Citallios. Designed by the agency Quadri Fiore Architecture, the tertiary complex is one of the key elements of the urban project of the city of Clichy-la-Garenne, both from an architectural and functional point of view.

On a floor area of 13,614 m2, E-conic will develop seven levels of office trays and will have in the RDC and entresol:

Three key points influenced the design of this major project: the proximity of the perimeter boulevard, the preservation of a residential building at 14 Victor Hugo Boulevard and the urban character of Place des Nations Unies.

From an environmental point of view, Eiffage Immobilier and Européquipements have committed themselves to obtain the NF certification of tertiary building HQE approach at an excellent level, the BREEAM International New Construction certification at the excellent level and the Wiredscore label at the gold level.

The building was sold in VEFA to Brookfield and Hemisphere companies. The work is carried out by Eiffage Construction Tertiaire for delivery in the 3rd quarter of 2021.

Personalities present at the event: